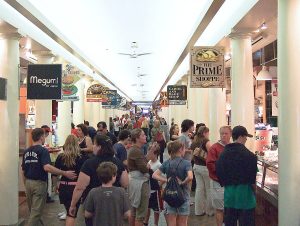 Quincy Market is a great place to hang around with friends and family and enjoy some good food.  There are 18 restaurants and 35 colonnade eateries of all cuisines.  You will surely find something that you like.

Many people ask what’s the best Bostonian food or what is the must-eat in Quincy Market.
Classic favorites include:

Most people enjoy a combo of lobster rolls and clam chowder, followed by a Boston cream pie. 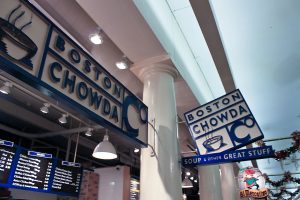 Boston clam chowder is a cream based seafood soup that contains clams, diced potatoes, onion and is thickened with crackers instead of flour.  In fact, traditional Boston chowder is thicker than other regions’.  If you are familiar with clear chowder like the Rhode Island version or the red Manhattan chowder, the Boston cream based version will take you to another level! And yes, Bostonians are obsessive enough to have a Chowderefest every year in the week of 4th July. You can find the two times winner Boston Chowda Co in Quincy Market.

Note that Boston cream pie has nothing to do with pies.  It is not a pie, it’s a cake!  It is a 2-layer cake with vanilla custard or cream filling and cover the cake with chocolate sauce. This cake is believed to be invented at Parker House Hotel in 1856.  It was then called “Parker House Chocolate Cream Pie”.  Over time, different varieties are developed.

The Boston brown bread is not the standard loaf of brown bread you are thinking of.  Traditionally, it’s a slightly sweet steamed bread.  The bread is sweetened by molasses or golden syrup together with raisins. It’s often round because the bread is steamed in a coffee can traditionally. The brown bread is served with home made baked beans.

Plan your visit by checking out the list of restaurants and colonnade eateries in Quincy Market here.