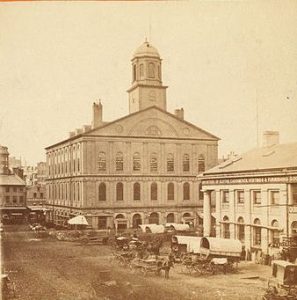 In May 1823, the newly elected mayor Josiah Quincy was disgusted by the view from his office in Faneuil Hall. He noticed that the chaos was caused by the fact that the 7,600 square foot market right underneath his office at Faneuil Hall was no longer sufficient to cater for the need of the city.  There were wooden sheds around the hall for more fish and produce market activities. Mayor Quincy formed a committee to find a solution to this but he wasn’t happy with the resolution. Instead, he led a new committee with new plans and substantial improvements around the area.

The mayor worked very hard to negotiate with property owners to acquire the required land for the development.  It all went smoothly until he came across Nathan Spear’s property. If you wonder why the South Market Street is much wider than the North Market Street, it’s because Nathan Spear’s estate was in the way.

On April 27, 1825, Mayor Quincy laid the cornerstone for this important market.  The famous architect and engineer Alexander Parris designed and completed the Quincy Market by August of 1826.  Since then, “Faneuil Hall Market” continued to be the proper name of the market while the public still refers it as Quincy Market.

Naming of the market

At the time, suggestions were made to name the new market to Mayor Quincy’s honour though he had refused this at his public speech.  He thought it’s more appropriate to honour the legacy Peter Faneuil.  The City Council obliged although the the ornate central chamber of the second-story was named “Quincy Hall”.  In 1989, to commemorate Mayor Quincy’s effort with the establishment, gilded “Quincy Market” signs were put on the pediment of both Greek Revival Porticoes. 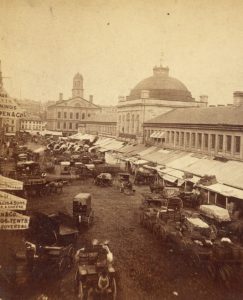 The market house opened to the public on August 26, 1826. The two-story Greek Revival edifice of 535 feet in length and 50 feet in width allowed 128 food stalls on the ground floor and exhibition area on the second floor. Many Faneuil Hall tenants relocated to the new market
building till it gradually close down.

The market continued to serve Boston but it had also reached its maximum capacity during the 1850s.  Enlargement plans were proposed, including addition of two more stories, and widening the South and North markets so that they are similar to the Quincy Market in the middle.  This was rejected in the end with the help of the City Solicitor to retain Alexander Parris’ original design.  To solve the capacity problem, the ground floor of Faneuil Hall had become market once again in 1858.  The North and South Market, however, desired enlargement to their structures too.  As these buildings were privately held, the City Council was more tolerant and the property owners were exempted from certain deed restrictions, particularly about the height of the buildings.  This explained the different additions happened in late 19th century.

From retail to wholesale

By mid 19th century, due to the expansion of Boston’s border, people tended to shop near their homes, Quincy market was noticeably turned to wholesale.  In fact, it got to the point when wholesaling became such dominant activities in the market that people believed it had a monopoly to the food supply of Boston, even though a study later revealed that the market was cheaper than local stalls both in terms of wholesale and retail. 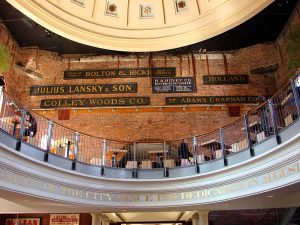 In 1970s, a multi-million dollar restoration had started.  This is also one of the very first festival marketplace concept being implemented.  Canvas awnings were installed along almost the entire length of the lateral walls. Rows of push carts and restaurants were running under the canopy.

As for the rotunda, bold changes were made.  The four sculpture niches inset into the pavilion’s second-story wall was emptied.  The plan also involved carving a large oval opening in the centre of the second-story. This serves as the main gathering place which tables were installed for dining.  Old signs were found and were used to give a heritage decor to the walls.

Above all, after 189 years, Quincy Market still serves Boston with lots of good food, shopping and being a good place for hanging out.